Saturday, on 2nd August at 21.30 was very worth to be on Piazza Duomo in Siena.
And again everything was because of music (this time classical music).

For the first time in the history of the Cantiere Internazionale d’Arte di Montepulciano the final act of the show was held exceptionally in Siena.

It was for sure an amazing event – symphony concert with 180 musicians conducted by Roland Böer on the occasion of the 39th International Art Workshop in support of the candidacy of Siena for European Capital of Culture 2019(http://www.2019si.eu/index.php/en/). That is why it was important to share the common goal of promoting a new European cultural perspective. Don’t forget that Siena is a candidate city for European Capital of Culture 2019. What you should know the verdict of the jury will be announced in October. So keep your fingers crossed for SIENA !

Our city was during the day surprised by some applauded flash mob organized by the team of Siena 2019 as well as performances of artists and musicians in various corners of the city. 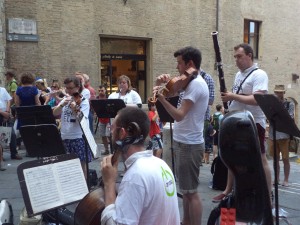 What is more during the concert audience got another surprise from FunDanza family (a cultural association that for 10 years worked for spreading hip hop culture in Siena) that showed an original dance performance to classical music.

I am convinced that Saturday evening was the unique act of union for everyone who had a possibility to be there. 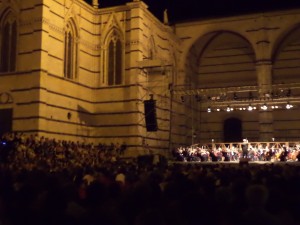 Living and teaching in Poland

Living the dream (and occasional nightmare) in Rome.